Consumers 50+ perceive a marketing bias against them

It was an advertisement that warmed hearts across Europe last holiday season — and, eventually, many in the United States by way of social media.

An older man who appears to struggle just to get out of bed shuffles to a shed, where he starts lifting an ancient barbell. A neighbor rolls her eyes. Even his daughter is concerned. But the man persists. The payoff comes at a Christmas party where the man lifts his young granddaughter to put a star on the tree — his goal all along. Only then are you shown the logo of the Dutch pharmacy company DocMorris.

In terms of tenderness and respect for older people, the ad rivaled an American one by Gillette in 2017 called “Handle With Care.” It showed a real-life adult son caring for his aging father, who needs assistance with shaving after a stroke. The ad won multiple awards at the Cannes Lions festival, the largest gathering in the creative marketing community.

If only older adults were always so respected. But the truth is, ads that show contempt for older people are still far too common.

An egregious example was 2018’s “Dear Young People, Don’t Vote.” That ad, sponsored by the Washington, D.C.-based nonprofit Acronym, showed older people as selfish, uncaring, out-of-touch caricatures who are ruining the future through their lack of concern about the young. While the goal of the ad was noble — to get young people to vote — its approach was both divisive and derogatory.

That same year, E-Trade’s ad “This Is Getting Old” enraged many people with its depictions of buffoonish older adults who were forced to work jobs they did not want and were not competent to do because they hadn’t bothered to save for retirement. The ad campaign mocked retirees who were struggling financially and alienated those who actually control the largest share of wealth.

E-Trade’s 2018 “This Is Getting Old” ad campaign caused furor due to its depiction of older adults forced to work demeaning jobs because they hadn’t saved for retirement.

“Advertising that stereotypes older adults and reinforces negative biases is not harmless,” says Paul Irving, chairman of the Milken Institute Center for the Future of Aging. “Imagine this ad portraying women, people of color or LGBTQ individuals in the same way. The response would be angry, and rightly so. It’s high time to call out ageism in advertising.”

A desire for change

A 2021 AARP survey showed that most consumers age 50-plus want marketing campaigns to grow up. Some 62 percent agreed with the statement “I wish ads had more realistic images of people my age.” And nearly half (47 percent) concurred that “ads of people my age reinforce outdated stereotypes.” Yet some advertisers still ignore or show little respect for older people — a remarkably shortsighted attitude.

People 55-plus now control 70 percent of all personal wealth in the United States, based on data in the Federal Reserve’s “Survey of Consumer Finances.” To refine those numbers: Surveys from the Bureau of Labor Statistics show that older adults buy 56 percent of all new cars and trucks, 55 percent of personal care products, 65 percent of health care, 68 percent of home maintenance and repairs, and 76 percent of all prescription drugs.

But advertising is still far too often out of sync with the reality of today’s older, more seasoned buyer. “Many ads are viewed by the older population as stereotypical and patronizing,” says Chip Conley, founder of the Modern Elder Academy. “Most advertisers receive a failing grade in their efforts to understand and relate to older adults.”

Lori Bitter, a former advertising executive, cites a glaring example. “I was excited to see a multigenerational family under the same roof in a Tide commercial,” she says. “The ad starts with a couple talking about their extended family’s laundry needs. But it ends with befuddled Grandpa entering the scene in his boxers, looking for his pants. There were so many clever approaches to the situation. Why make fun of an older person and poke fun at a vulnerability like memory loss?”

The bias toward the young in advertising traces back decades. During the Mad Men heyday of the 1960s, young people represented the most potent growth sector of the economy. Tens of millions of boomers hadn’t decided what kind of shampoo, shoes or cars they preferred. Older people were thought to be frugal and already brand loyal. It was smart for marketers of nearly everything to target people between ages 15 and 25, when young consumers decided what they liked.

But those teenage boomers have grown up to become savvy, adaptable consumers with lots of time, affluence and disposable cash.

A major cause of ageism in advertising may be the lack of age diversity among those who are actually creating the ads. The median age for a manager in America’s advertising agencies is 37, and the average age of a creative person in the industry is only 28; 71 percent of creative directors are male.

That helps explain why those age 50 and over who do most of the consumer spending represent only 15 percent of adults in online media images and are seven times more likely than younger adults to be portrayed negatively, according to a 2019 AARP study.

Mike Hodin, former head of global public affairs for Pfizer and now CEO of the Global Coalition on Aging, says, “There’s an enormous opportunity that marketers still don’t understand. Many advertisements treat older adults as dependent and in need of help, rather than as a target market representing substantial revenue growth.”

That impact is multiplied for older minorities. “Very few companies market to the older Black community,” reflects Karyne Jones, CEO of the National Caucus and Center on Black Aging. “You might see an ad featuring an older Black woman going to a pharmacy or acting as a caregiver, but you don’t see images of older Black women buying luxury goods or exercising.”

There are rays of light, like Subaru’s ad last year titled “Girls’ Trip.” In it, a Hispanic woman and her granddaughter are shown on a fun outing. The pair enjoy milkshakes, and the energetic grandmother plays matchmaker for the girl with a cute boy. The ad’s end tagline says: “Some relationships get better with time.”

Indeed.com’s jobs search commercial “The Box” starts off with a gray-haired man carrying a box of office supplies, with the narrator saying: “He knew this day would come.” But instead of retiring, the man is actually starting a new job at a trendy-looking office with a multigenerational team.

The ad industry needs younger executives to be sensitive to an older audience. And it might help to add more older people to the ranks of those making ads. “Companies would do well to insist upon age diversity in their marketing departments,” Hodin says. “It’s not a matter of being politically correct; it’s in their own self-interest.”

Advertising: The Good, Bad and Ugly 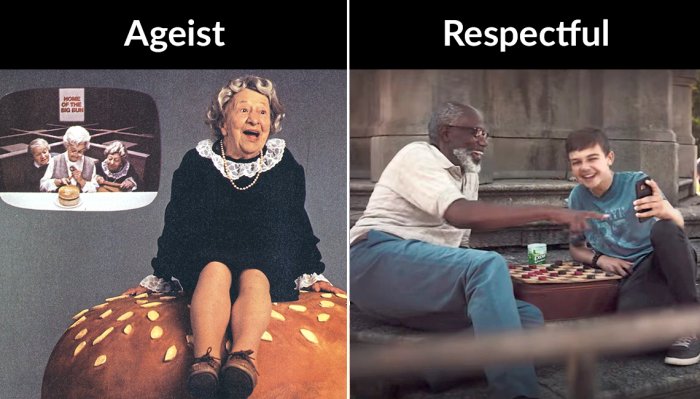 Older people as cartoonish fuddy-duddies:Back in 1984, Wendy’s offered an early look at blatant ageist advertising. The producers of this ad must have thought it was funny to portray three cranky old women, one of them shouting, “Where’s the beef?” Such ads may be memorable, but what’s so funny about insensitivity, caricature and ridicule?

Older people as mentors and friends: This Extra Refreshers Gum ad titled “Max & Bill” (2019) sensitively portrays the friendship between a young teen and an older man over a checkerboard in the park. The man bonds with the boy, and they establish a deep connection that’s particularly poignant when the older man doesn’t show up one day and his friend looks for him. 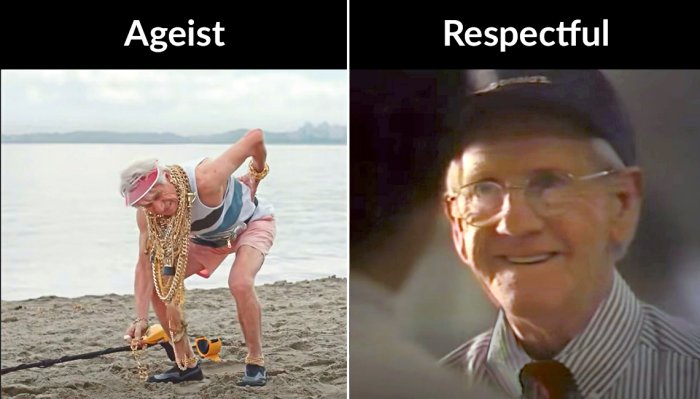 Older people as kooks: In Duracell’s “Beach x Bear” (2019), a silver-haired man is wandering around a beach with a metal detector. He says he’d rather his battery have extra life than extra power. By the commercial’s end, the caricatured old man can’t even stand up. Perhaps it’s meant to be funny, but it’s mean, stereotypical and ageist.

Older people wish to be productive: Respect should be given to one of the first positive depictions of older adults, back in 1987. McDonald’s had created the McMasters program to hire older adults to work in their restaurants. This ad actually featured a real-life McMasters graduate and McDonald’s employee: “The New Kid.” In it, he is shown to be likable and realistic.

Ken Dychtwald is a nationally recognized expert on aging and ageism. His most recent book on these topics is What Retirees Want: A Holistic View of Life’s Third Age, coauthored with Robert Morison.